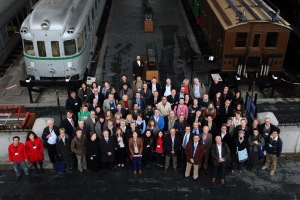 The 2012 T2M Transportation and Mobility Conference was held in Madrid — since this was my first time attending I would have to say I would definitely go back. It was a very cozy and even intimate conference with a conversational feel, sessions were well attended and discussion was lively. Each year they take what I would call a ‘class photo’ above you can see the photo from this year. Usually there are optional excursions highlighting the theme of the conference — the one I went on was a tour of the ‘ghost station’ Chamberi in Madrid that is open to those interested, now as a museum of sorts–not to be confused with the Railway Museum / Museo del ferrocarril, which was the conference’s central location (Delicias). The session comprised by Susan Larson, Araceli Masterson and myself was framed as a way of blending trains/transportation with culture in general terms, and the discussion was quite interesting indeed, (thanks to those who made it so worthwhile!), and even though most of the other sessions were not as ‘cultural’ (in humanistic terms) there was a great talk on intermodality in Anglophone film as well as some fascinating airport talks (the phrase “airports are about cars” is now etched in my memory). Anyone who attended the excursion to the ghost museum should take a look at Araceli’s paper on that very museum, which can be found with some other excellent articles in this book (ch. 8) – Trains, Culture and Mobility: Riding the Rails (2012). See the full program below… END_OF_DOCUMENT_TOKEN_TO_BE_REPLACED

Steven Spalding and I wrote about train graffiti and its relationship to urban process and identity formation for a chapter in the recently published book Trains, Culture and Mobility.

The book had some phenomenal contributors in it: including Alexander Medcalf, who just won an award, congrats!

[the info. below is re-posted from T2M]:

The 2011 winner of the £250 (pounds Sterling) prize is Alexander Medcalf, a PhD student at the Institute of Railway Studies and Transport History at the University of York. His submission forms part of his research into the commercial cultures of one of Britain’s best known railway companies in the first half of the twentieth century. The thesis title is “Picturing the Railway Passenger as Customer in Britain: the Great Western Railway, 1903-1939”.