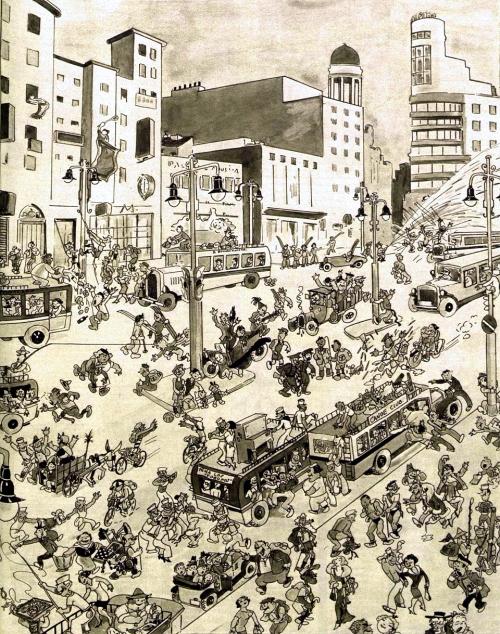 Antonio Bellón Uriarte was an artist from Jaén. He was born in 1904 and lived in Madrid for almost his entire life, until 1991 when he died. Witness to the life of the [Spanish] capital, he drew – exhaustively and down to the most minute details – scenes that depicted the life of the urb, always with an exaggerated and playful touch, caricaturing the everyday.

In this sequence from ‘Madrid’s Gran Vía’, as if it were a photo taken in the early morning, Bellón illustrates a wild and chaotic summer weekend that might just as well have taken place in 2012. One sees all of the typical characters of that era, which was so modern and so close to our own. The image draws together the early-risers, the daytime folk, the nightowls, and the melancholic seeking an elusive happiness in the early hours among the shadows of the sordid and prohibited. Packed together tightly on the pavement and the sidewalks all manner of imaginable and unimaginable characters walk along in a fantastic snapshot.

The perspective of the vignette published here shows us the Carrión building in the background and following along the slope of the avenue with the doubled lamps of the lightposts in the middle of the road, almost in the foreground, the La Adriática building (1928), the Avenida cinema (1928), the Palacio de la Música (1928) and, finally, at left, the [mixed-use] housing and office building in which one would find the Regente Hotel (1926). Closer to us, still, we see a multitude of people mixing with one another. Sailors and blouses carousing from dusk until dawn; morning cyclists moving at top speed along the Gran Vía; excursionists in search of the Cañada Real that will carry them to the Castellana, toward Chamartín or Colmenar; lost skiers with their winter gear heading for the slopes; stunned country bumpkins, ristras of seasoned pork; families with small children passing through in search of a park’s fresh air; sellers of recently made churros; hot-churro thieves; tourists who are spent, recovering, aboard buses and ready for it all; pairs of guards, with loaded rifles, their minds wandering; motorists leveling and deafening others with their powerful machines; armed hunters pursuing cats or pigeons; milkmen bored from such bad work; sentries with keys and stick on their backs; musicians playing or else taking a break, but no less animated; the accidental injury, a car propped up against a lamppost, itself in good spirits; city streetwashers using the hose to spray soldiers who happily shower naked in the middle of the street; resigned prostitutes; happy young drunk ladies; women who are also drunk and also happy; men who are quite content; ruffians taking advantage of the happiness of others; children selling newspapers; men with smiles who are hanging from the lampposts; fishermen with their rods, baskets and bait, heading for the high river basin of the Manzanares or toward the Henares or the Jarama or the Alberche or the Perales, which sometimes boasts its own fish. Many people and much happiness in this summer of 1934, 78 years ago. It might have been like the summer of 2012, or perhaps better said [if only the summer of 2012 had been like that summer 78 years ago].