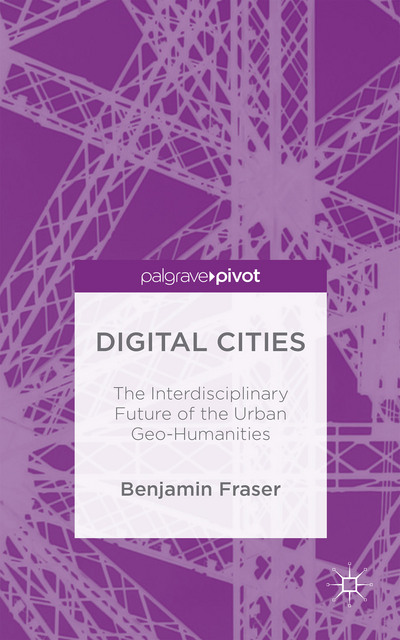 ‘Making a strong case for interdisciplinary layering as a way to represent the many layers – physical, social, aesthetic – of the city, Fraser’s visionary book is as much a meditation on the future of the digital humanities itself as it is on the city as an object of humanistic inquiry. He cogently charts a course for how humanists will employ thick mapping as a way to practice the digital humanities.’ [–David J. Staley, Associate Professor of History and Adjunct Associate Professor of Design, Director of the Goldberg Center at The Ohio State University, USA]

Digital Cities stakes claim to an interdisciplinary terrain where the humanities and social sciences combine with digital methods. Part I: Layers of the Interdisciplinary City converts a century of urban thinking into concise insights destined for digital application. Part II: Disciplinary/Digital Debates and the Urban Phenomenon delves into the bumpy history and uneven present landscape of interdisciplinary collaboration as they relate to digital urban projects. Part III: Toward a Theory of Digital Cities harnesses Henri Lefebvre’s capacious urban thinking and articulation of urban ‘levels’ to showcase where ‘deep maps’ and ‘thick mapping’ might take us. Benjamin Fraser argues that while disciplinary frictions still condition the potential of digital projects, the nature of the urban phenomenon pushes us toward an interdisciplinary and digital future where the primacy of cities is assured.

PART I: LAYERS OF THE INTERDISCIPLINARY CITY
1. What is the City?
2. Art and the Urban Experience

PART II: DISCIPLINARY/DIGITAL DEBATES AND THE URBAN PHENOMENON
3. The Humanities, the Social Sciences and the Digital Sciences
4. What is Urban Totality?

PART III: TOWARD A THEORY OF DIGITAL CITIES
5. What are Digital Cities?
6. Thick Mapping as Urban Metaphor

The cover for Toward an Urban Cultural Studies: Henri Lefebvre and the Humanities, the first of many new books in Palgrave’s new HISPANIC URBAN STUDIES book series, edited by B. Fraser and S. Larson.

Toward an Urban Cultural Studies is a call for a new interdisciplinary area of research and teaching. Blending Urban Studies and Cultural Studies, this book grounds readers in the extensive theory of the prolific French philosopher Henri Lefebvre. Appropriate for both beginners and specialists, the first half of this book builds from a general introduction to Lefebvre and his methodological contribution toward a focus on the concept of urban alienation and his underexplored theory of the work of art. The second half merges Lefebvrian urban thought with literary studies, film studies and popular music studies, successively, before turning to the videogame and the digital humanities.

Zoned in the USA

The Origins and Implications of American Land-Use Regulation

Why are American cities, suburbs, and towns so distinct? Compared to European cities, those in the United States are characterized by lower densities and greater distances; neat, geometric layouts; an abundance of green space; a greater level of social segregation reflected in space; and—perhaps most noticeably—a greater share of individual, single-family detached housing. In Zoned in the USA, Sonia A. Hirt argues that zoning laws are among the important but understudied reasons for the cross-continental differences.

Hirt shows that rather than being imported from Europe, U.S. municipal zoning law was in fact an institution that quickly developed its own, distinctly American profile. A distinct spatial culture of individualism—founded on an ideal of separate, single-family residences apart from the dirt and turmoil of industrial and agricultural production—has driven much of municipal regulation, defined land-use, and, ultimately, shaped American life. Hirt explores municipal zoning from a comparative and international perspective, drawing on archival resources and contemporary land-use laws from England, Germany, France, Australia, Russia, Canada, and Japan to challenge assumptions about American cities and the laws that guide them.

Just got my copies of Marxism and Urban Culture in the mail: 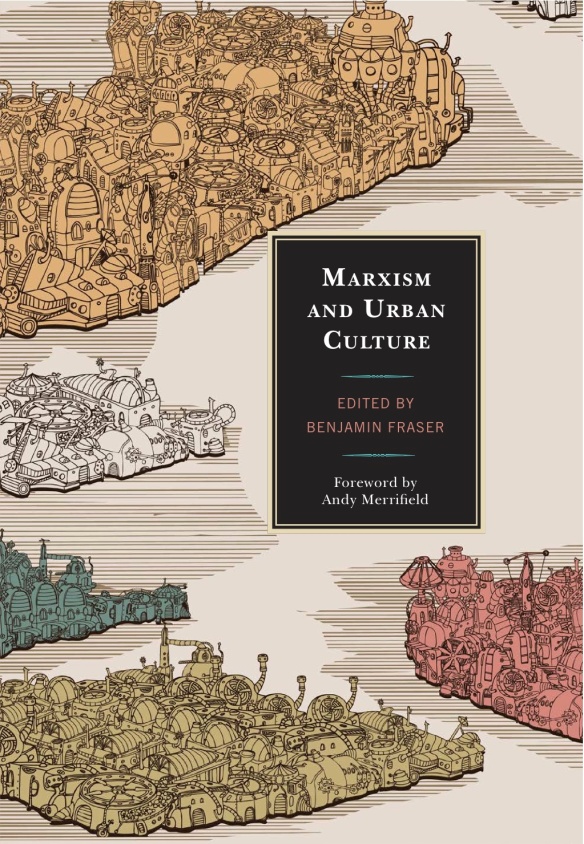 Marxism and Urban Culture is the first volume to reconcile social science and humanities perspectives on culture. Covering a range of global cities – Bologna, Buenos Aires, Guatemala City, Liverpool, London, Los Angeles, Madrid, Mahalla al-Kubra, Montreal, Osaka, Strasbourg, Vienna – the contributions fuse political and theoretical concerns with analyses of urban cultural practices and historical movements as well as urban-themed literary and filmic art. Conceived as a response to the persistent rift between disciplinary Marxist approaches to culture, this book prioritizes the urban problematic and builds implicitly and explicitly on work by numerous thinkers: not only Karl Marx but also David Harvey, Henri Lefebvre, Friedrich Engels and Antonio Gramsci, among others. Rather than reanimate reductive views either of Marx or of urban theory, the chapters in Marxism and Urban Culture speak broadly to the interdisciplinary connections that are increasingly the concern of cultural scholars working across and beyond the boundaries of geography, sociology, history, political science, language and literature fields, film studies and more. A foreword written by Andy Merrifield (the author of Metromarxism [Routledge 2002]) and an introduction by Benjamin Fraser (the author of Henri Lefebvre and the Spanish Urban Experience [Bucknell UP 2011]) situate the book’s chapters firmly in interdisciplinary terrain. 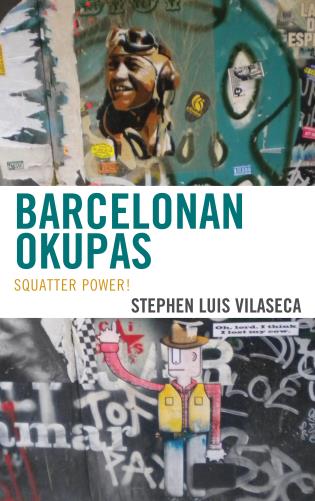 Barcelonan Okupas: Squatter Power! is the first book to combine close-readings of the representations of Spanish squatters known as okupas with the study of everyday life, built environment, and city planning in Barcelona. Stephen Vilaseca broadens the scope of Spanish cultural studies by integrating into it notions of embodied cognition and affect that respond to the city before and against the fixed relations of capitalism. Social transformation, as demonstrated by the okupas, is possible when city and art interrelate, not through capital or the urbanization of consciousness, but through bodily thought. The okupas reconfigure the way thoughts, words, images and bodily responses are linked by evoking and communicating the idea of free exchange and openness through art (poetry, music, performance art, the plastic arts, graffiti, urban art and cinema); and by acting out and rehearsing these ideas in the practice of squatting. The okupas challenge society to differentiate the images and representations instituted by state domination or capitalist exploitation from the subversive potential of imagination. The okupas unify theory and practice, word and body, in pursuit of a positive, social vision that might serve humanity and lead the way out of the current problems caused by capitalism.

[Click here to listen to a podcast interview with Stephen Vilaseca]

[Click here to go to the book’s Amazon page]

UCS 003 Fraser on Antonio López García’s Everyday Urban Worlds: A Philosophy of Painting   (6 August 2013) [BOOK TEASER] The author reads a concise draft introduction for a book in progress on the famed Spanish painter. Topics include art history, other Spanish painters (from Velázquez to Goya to Picasso, Dalí, Gris and M iró), Madrid’s urban space, temporality, and the book’s structure and interdisciplinary method (incorporating urban studies, geography, architecture, literature, cinema and more…). Born in Tomelloso in 1936, López García is an internationally recognized ‘hyperrealist’ painter, and in recent years his work Madrid desde Torres Blancas set an auction record at Christie’s for the sale of a work by a living Spanish artist.

This book offers the first in-depth study of experimental and popular music scenes in Beirut, looking at musicians working towards a new understanding of musical creativity and music culture in a country that is dominated by mass-mediated pop music, and propaganda. Burkhalter studies the generation of musicians born at the beginning of the Civil War in the Lebanese capital, an urban and cosmopolitan center with a long tradition of cultural activities and exchanges with the Arab world, Europe, the US, and the former Soviet Union. These Lebanese rappers, rockers, death-metal, jazz, and electro-acoustic musicians and free improvisers choose local and transnational forms to express their connection to the broader musical, cultural, social, and political environment.

Burkhalter explores how these musicians organize their own END_OF_DOCUMENT_TOKEN_TO_BE_REPLACED

Imagining Global Amsterdam brings together new essays on the image of Amsterdam as articulated in film, literature, art, and urban discourse, considered within the context of globalization and its impact on urban culture.

Subjects include: Amsterdam’s place in global cultural memory; expressions of global consciousness in Amsterdam in the ‘Golden Age’; articulations of Amsterdam as a tolerant, multicultural, and permissive ‘global village’; and globalization’s impact ‘on the ground’ through city branding, the cultural heritage industry, and cultural production in the city.

Written by an interdisciplinary team of scholars, and united by a broad humanities approach, this collection forms a multifaceted inquiry into the dynamic relationship between Amsterdam, globalization, and the urban imaginary.

Henri Lefebvre did work in rural sociology before turning fully to urban matters (does the urban even exist ‘outside of’ the rural?)…

This new edited volume by Joan Ramon Resina and William R. Viestenz “The New Ruralism: An Epistemology of Transformed Space” seems to look at new stages in the dialectical relationship between the city and the country (mentioning Raymond Williams’ book by that title in its introduction) You can download the pdf of the introduction to The New Ruralism for free from the publisher’s site here. For more on Sennett himself, go to: http://www.richardsennett.com/site/SENN/Templates/Home.aspx?pageid=1