UCS 004 Lamb on Parkour, Architecture and the Body (12 August 2013)  Conversational interview inspired by scholar Matthew Lamb’s article “Misuse of The Monument: The Art of Parkour and the Discursive Limits of a Disciplinary Architecture,” forthcoming in the Journal of Urban Cultural Studies (1.1, 2013). Pitched at a theoretical level (complementing the specific place-bound analysis of  Monument Circle in Indianapolis found in the article) discussion centers on the origins (and varieties) of parkour–an athletic engagement with the built environment (misuse through climbing, dropping, vaulting, jumping…)–and the conditioning of the body in place and as subject to architectural and urban forces. 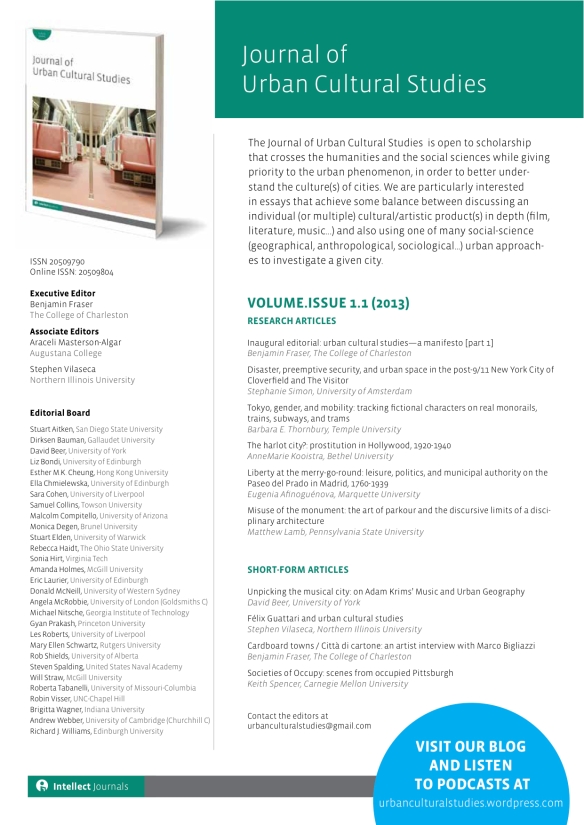 The 2012 T2M Transportation and Mobility Conference was held in Madrid — since this was my first time attending I would have to say I would definitely go back. It was a very cozy and even intimate conference with a conversational feel, sessions were well attended and discussion was lively. Each year they take what I would call a ‘class photo’ above you can see the photo from this year. Usually there are optional excursions highlighting the theme of the conference — the one I went on was a tour of the ‘ghost station’ Chamberi in Madrid that is open to those interested, now as a museum of sorts–not to be confused with the Railway Museum / Museo del ferrocarril, which was the conference’s central location (Delicias). The session comprised by Susan Larson, Araceli Masterson and myself was framed as a way of blending trains/transportation with culture in general terms, and the discussion was quite interesting indeed, (thanks to those who made it so worthwhile!), and even though most of the other sessions were not as ‘cultural’ (in humanistic terms) there was a great talk on intermodality in Anglophone film as well as some fascinating airport talks (the phrase “airports are about cars” is now etched in my memory). Anyone who attended the excursion to the ghost museum should take a look at Araceli’s paper on that very museum, which can be found with some other excellent articles in this book (ch. 8) – Trains, Culture and Mobility: Riding the Rails (2012). See the full program below… END_OF_DOCUMENT_TOKEN_TO_BE_REPLACED

This just in from Hiroki Shin on behalf of T2M:

The International Association for the History of Transport, Traffic and Mobility (T2M) is currently planning to incorporate in its website a list of course syllabi/syllabuses related to the history and general studies of mobility (in this round, English syllabi only). Our aim is to publicise the teaching of mobility studies, assist in improving the standard of such studies and facilitate its introduction to a wider range of academic institutions.

We would like to request you to kindly send us a copy of your mobility history/studies course syllabi, in the form of an email attachment (MS Word or PDF format) to Hiroki Shin (hiroki.shin[at]york[dot]ac[dot]uk), if you are currently giving such courses at an academic END_OF_DOCUMENT_TOKEN_TO_BE_REPLACED

Last week we asked you to submit questions for David van der Leer, the Guggenheim architecture and urban studies curator behind stillspotting nyc. The two-year project calls on architects, artists, and composers to create “stillspots” throughout the five boroughs, and this time around, legendary Estonian composer Arvo Pärt has collaborated with architecture firm Snøhetta, the designers of the museum pavilion at the World Trade Center site. The current edition of stillspotting nyc runs September 15–18 and 22-25.

How does a museum step out of its iconic building for experimental, off-site urban studies projects? Isn’t stillness the antithesis of the city? And why include an improv comedy group? Read Van der Leer’s response END_OF_DOCUMENT_TOKEN_TO_BE_REPLACED

Great short video on how data is different from knowledge (“knowledge is not simply a data set”); getting knowledge from data requires an interpretation, an experience in a way that data does not. The video comes from the Picnic festival: Life in Readable Cities hosted by the European Journalism Center.

Here’s also her piece on “Why Cities Matter”.

For anyone interested in watching it here is a link to the lecture–or rather to the exercise in organized rambling–I gave at the University of Kentucky, now on UK vimeo:

“Toward an Urban Cultural Studies: Henri Lefebvre, Space and the Culture(s) of Cities”

Thanks again to the Department of Hispanic Studies there. The prezi itself can be seen in the background on the screen, but as announced before can also be viewed here. See also this previous post for more general information about the talk.

I just returned from delivering an invited lecture at the University of Kentucky, which I titled:

Toward an Urban Cultural Studies: Henri Lefebvre, Space and the Culture(s) of Cities.

Clicking on the above link will take you to the prezi that accompanied the talk, which includes video and audio clips, although it leaves out the first 15-20 minute set-up which was devoted to the academic spat between C.P. Snow and F.R. Leavis in their 1959 and 1962 lectures (see an earlier post). The talk was a form of organized rambling at a general level about Lefebvre’s insights into cities, the timeliness of urban cultural studies, interdisciplinary issues in general, David Harvey, city rhythms, and so on, so a lot is left out of the prezi alone, but it may still be interesting to watch. Given that I was pitching the talk so broadly, I was thrilled that so many non-Hispanic Studies faculty/students were able to make it.

If you haven’t seen or used prezi before (higher functionality/privacy free for educators with an .edu email address) I can say that it may blow your mind as a presentation format (I was blown away when I first saw this used at a conference last year). After watching a prezi (many are ‘public’/freely available on the site to view) it becomes clear just how much power point presentations are linked to the cultural moment in which I grew up–which revolved around linear slideshows of non-digital photography (didn’t you hate it when that one slide got stuck in the projector?).

Special thanks to U Kentucky Professors Susan Larson and Aníbal Biglieri in particular, and also to many other faculty members from both the Department of Hispanic Studies there (and its fantastic graduate students) and beyond, for making it such a great experience!