The home page for the Hispanic Urban Studies book series is available here on the Palgrave website. Below is information about the series and a current listing of titles.

HISPANIC URBAN STUDIES is a series of scholarly monographs, edited volumes, and translations focusing on Spanish, Latin American and US Latino urban culture.

The humanities and the social sciences are closer in methodology than ever before. HISPANIC URBAN STUDIES serves a dual purpose: to introduce radically original humanities work to social science researchers while affirming the relevance of cultural production to discussions of the urban. This book series takes advantage of and further contributes to exciting interdisciplinary discussions between Hispanic Studies and Cultural Geography with the aim of bringing in new ideas about space, place, and culture from all parts of the Hispanic world. Monograph titles bring together analyses of the cultural production of the Hispanic world with urban and spatial theory from a range of disciplinary contexts. The series also welcomes proposals for edited volumes related to cities that contribute in creative ways to our understanding of the spatial turn in Hispanic Studies. Translations published in the series introduce English-language readers to the rich legacy of materials on urbanism, urban culture, and cultural geography originally published in Spanish.

About the series editors:

Benjamin Fraser is Professor of Hispanic Studies at the University of Arizona, USA.

Toward an Urban Cultural Studies: Henri Lefebvre and the Humanities (2015) by Benjamin Fraser is a call for a new interdisciplinary area of research and teaching. Blending Urban Studies and Cultural Studies, this book grounds readers in the extensive theory of the prolific French philosopher Henri Lefebvre. Appropriate for both beginners and specialists, the first half of this book builds from a general introduction to Lefebvre and his methodological contribution toward a focus on the concept of urban alienation and his underexplored theory of the work of art. The second half merges Lefebvrian urban thought with literary studies, film studies and popular music studies, successively, before turning to the videogame and the digital humanities. Benjamin Fraser’s approach consistently emphasizes the interrelationship between cities, culture, and capital.

Poetics of Opposition in Contemporary Spain: Politics and the Work of Urban Culture (2015) by Jonathan Snyder. The Spanish economic crisis and recent social mobilizations have renewed interest in critically rethinking cultural, social, and political circumstances. Critical readings mark two main loci as the stages of activity: cultural production largely of fringe status, and protests and assemblies in public spaces throughout Spanish cities. Pairing cultural analysis in urban contexts with interdisciplinary approaches to political culture, Jonathan Snyder argues that recent cultural production – including narrative, poetry, photography, theatre, and performance – in Spain grapples with the conditions and possibilities for social transformation in dialogue with the ongoing crisis, neoliberal governance, and political culture in Spain’s democratic history.

Ecuadorians in Madrid: Migrants’ Place in Urban History (2016) by Araceli Masterson-Algar. In the decade between 1998-2008, Spain became the main destination for Ecuadorian migrants, and Madrid, Spain’s capital, became the city with the largest Ecuadorian population outside of Ecuador. Through a combination of ethnographic research and cultural analysis, this book addresses the interconnections between spatial practices, cultural production, and definitions of citizenship in migration dynamics between Ecuador and Spain, showing how Ecuadorians are key actors in Madrid’s recent urban history. Looking at the city as form and content, constitutive and constituting of ideological processes, each chapter analyzes the spatial practices of Madrid’s Ecuadorian residents through various forms: the body, the home, public and leisure spaces, the city, the nation, and transnational circuits. Rather than addressing migrants as a general human type marked by (dis)placement, each chapter offers an illustration of how Ecuadorian migrants forge transnational processes through their everyday lives in specific time and place, and how these processes manifest culturally on both sides of the Atlantic. 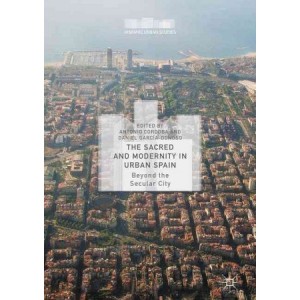 The Sacred and Modernity in Urban Spain: Beyond the Secular City (2016) edited by Antonio Cordoba and Daniel García-Donoso

This book explores how modernity, the urban, and the sacred overlap in fundamental ways in contemporary Spain. Urban spaces have traditionally been seen as the original sites of modernity, history, progress, and a Weberian systematic disenchantment of the world, while the sacred has been linked to the natural, the rural, mythical past origins, and exemption from historical change. This collection problematizes such clear-cut distinctions as overlaps between the modern urban and the sacred in Spanish culture are explored throughout the volume. Placed in the periphery of Europe, Spain has had a complex relationship with the concept of modernity and commonly understood processes of modernization and secularization, thus offering a unique case-study of the interaction between the modern and the sacred in the city.