In the central Brussels neighbourhood of Ixelles, a fifty-metre-tall elephant has been introduced to Place Flagey. The place is an open square where people gather, young children splash around in water fountains, and each weekend a vibrant market transform the square to bustling, throbbing mass of colours, smells, and textures. The sculpture is called a weeping elephant and has been positioned in the northern corner of the place across from the imposing Flagey building that houses a cultural centre and the school of architecture from the Université libre de Bruxelles. The elephant is part sculpture, part performance art, and part provocation and will stand in position from July 12th until September 22nd 2017.

The elephant is part of a series called Ode to the Wilderness by Dutch artist Jantien Mook who has been fascinated by rhythms and patterns from childhood. Her love of nature and animals is part of the rationale behind the weeping elephant, looking to explore the subtleties and movements of the natural world. The weeping elephant is a sculpture of an African elephant, made of beech stems, patterns in steel, segments of bark and knots for the eyes.

Jantien Monk explains that the sculpture ‘travels around the world and appears in cities, she ‘weeps’ to make her presence felt’. The elephant provokes the public to think about the daily presence of such creatures and the interactions between nature, animals, and humans. At the same time the weeping elephant is an interesting object that draws attention. Children will play with the sculpture, people sit at the elephant’s feet, and others just enjoying taking pictures as the colours change in sunlight.

The elephant certainly brings about changes in the felt atmosphere of the square, at the same time it helps to make a direct and daily confrontation to people’s awareness and appreciation the role urban places have on the wilderness and wildlife. The elephant will travel around Europe till the end of the year, instigating daily confrontations and atmospheres.

On a recent trip to Italy, I had the pleasure of visiting the cities of Rome and Siena. Rome, the “Eternal City”, enchants with its multiple layers of history. The modern city super-imposed on several earlier urban texts: Mussolini’s functional and monumental fascist infrastructure on top of the Baroque city of flourishes and curves; the neo-classical Renaissance city on top of a messy Medieval street grid; Medieval housing blocks on top of ancient Roman foundations, which in turn sit upon even earlier foundations (Greek, Etruscan, etc.). A shopkeeper informed me that beneath her shop was an Egyptian temple.

Siena, one of the powerful and wealthy Renaissance city-states, arguably the Frankfurt of its time in terms of its banking dynasties (Monte dei Paschi di Siena is still one of Italy’s largest banks), sits atop a hill crowned by a marble-clad cathedral.

I have visited Italy before, most recently in 2009 and before that, studied one undergraduate semester in Rome (in 2004). But this summer’s visit felt especially timely and powerful, given the stories that these ancient cities tell about the waves of history and the rise and fall of empires. It is perhaps cliched to compare Rome’s rise and fall to Pax Americana and / or the rise and fall of the global capitalist empire, but it is hard to avoid such comparisons (at the time of this writing, a controversial play portrays Donald Trump as Julius Caeser, widely considered Rome’s first dictator). The Colosseum towers above the crowds with its numbered entries, as global cities build and destroy sport arenas constructed in the same way. The market (or shopping malls of its day) of Emperor Trajan (below) crumbles beneath modern retail advertisements, as modern retail itself creatively destroys itself with Amazon and drone-delivery. History is always present. 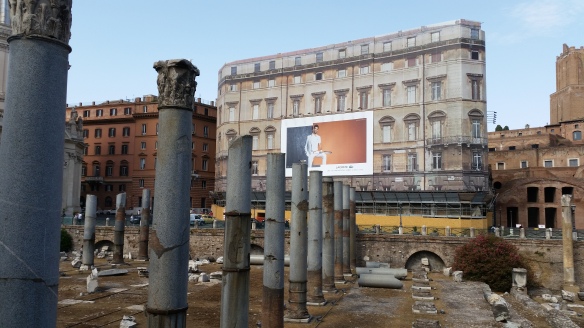 In particular, I was struck with three thoughts while meandering through cobblestone streets.

1. Urban Governance as “Bad” or “Good”: Both the ancient Roman urban world and the Renaissance Italian era had very strong and well-developed concepts of “good” v. “bad” urban government, that are directly relatable to our contemporary era. 21st-century urban governance is fraught, difficult, and increasingly characterized by divides and schisms within the new global populism. “Good” urban mayors emerge as global superstars (in popular imagination, LA’s Villaraigosa or Bogota’s Penelosa come to mind); while “bad” mayors seem determined to destroy, rather than to build, urban best practice (Toronto’s Rob Ford one recent example). In an urban world where an increasing majority of humans live in cities, and cities compete globally in an interlinked economy, the difference between good and bad urban governance has huge implications.

This was starkly the case as well in 14th century Siena. While touring Siena’s medieval city hall, I came across three frescoes dating from 1338-1339, painted by Amborgio Lorenzetti, representing the allegory of “good and bad government” (see below).

“Bad government” (above) features the devil-like horned tyrant, while the captive figure of Justice lies bound. They are flanked by the figures of Cruelty, Deceit, Fraud, Fury, Division, and War, and above, float the figures of Avarice, Pride, and Vainglory. These figures, according to an advice book for city magistrates of the time, were considered to be the “leading enemies of human life” (Skinner, 2009). Surely these same character flaws apply to many vainglorious modern mayors, council members, civic leaders.

Meanwhile, in the allegory of “good government” above, there are six crowned, stately female figures: Peace, Fortitude and Prudence on the left, Magnanimity, Temperance and Justice on the right. “Peace”, however, sits upon a cache of weapons: a city maintains its peace but must not surrender its strength if attacked.

In the new populism, cities around the world are maligned, otherized, and blamed for many of society’s ills (e.g. the anti-urban language of New Yorker Donald Trump, or the anti-London rhetoric of the pro-Brexit discourse in Britain). Siena’s leaders understood the power of good urban governance as a tool to placate the people, a lesson relevant today.

Medieval and Renaissance Italy was not a unified nation (that wouldn’t happen until the 1870s), but rather a competitive collection of powerful, autonomous City-States that gained commercial, political and cultural dominance at different times. Venice, Genoa, Florence and Siena are just four examples of this territorial organization. Each city maintained a powerful army; had a powerful economic competitive advantage usually centered around one or a cluster of specialized trades; and also cultivated a unique sense of self and culture through the patronage of art and architecture. Time also cultivated a distinctly local, rather than national sense of belonging; unique customs and traditions, and in many cases even distinct dialects and languages.

The 19th century through the end of the Cold War was a period of national unification and amalgamation, as unique cities with centuries of history were swept up into the re-ordering of empires and joined into (often artificial) nation-state boundaries. “Italy” and “Germany” came into being; and “Yugoslavia” was just one example of the blurring of smaller boundaries into a larger whole. The advent of the European Union in the late 20th century is perhaps the most prescient example of the collapsing of the city-state layer of government into a broader sense of global region. Many other national and supra-national clusters emerged, from NAFTA and MERCOSUR to ASEAN and OPEC. Urbanism was envisioned by theorists as increasingly “planetary” (see Brenner, 2014), embedded in relational global flows and networks and no longer tied specifically to particular geographies. Harvey (1989) predicted this new global urban geography in late capitalism, as global supply chains and labour flows circulated more rapidly in an increasingly flat world.

However, more recently, the failures of the 19th and 20th-century conception of the “nation state” or even “global region” seem to point again to the primacy of the City-State as a rational, and even utopian, scale of global territorial governance and organization. One can point toward the (economic) success of City-State models such as Singapore, or to the increasing dominance of mayors and urban leaders in terms of global governance and policy. Localism has challenged notions of state, nation and region from Brexit to the continued attack on Federalism v. State in the United States (by the right-wing); cities in the Global South are emerging as command centers for larger and larger hinterlands as rural to urban migrations continue from Africa to China. Indeed, some argue that in certain contexts, effective national governance is becoming nearly impossible. Britain continues to devolve power to locally-elected mayors (following the American model). As the United States rejects global climate change accords, its mayors commit their cities to CO2 reduction.

Amidst the flows of the current populist Balkanization (which also manifests in cyberspace), we may be returning to an age like that in which Siena fought for dominance with its urban counterparts.

3. Cultural Symbols as Essential to the Old, and New Nationalism 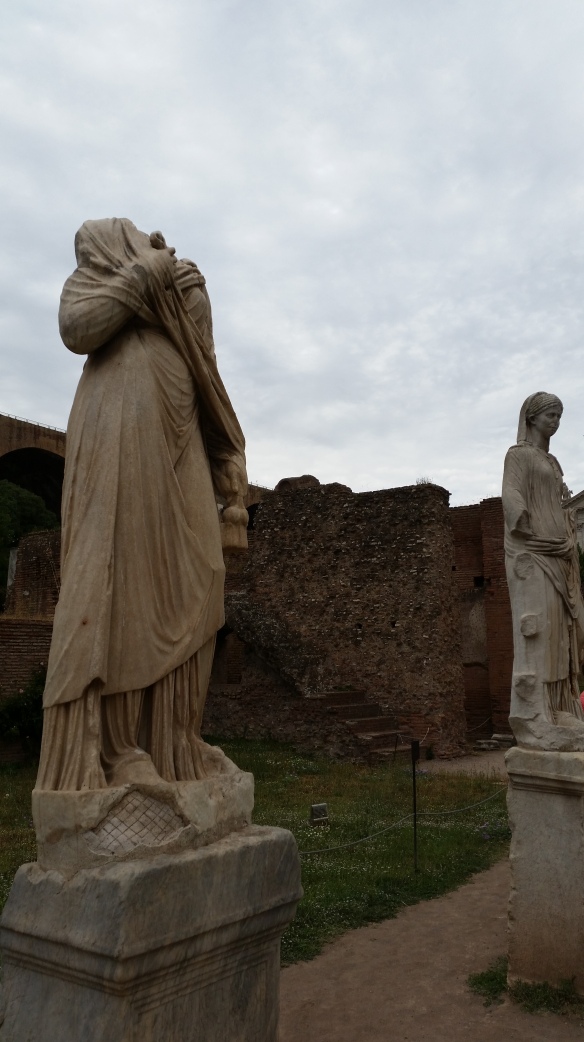 Somewhat contrasting the observations above, I had another thought while meandering through the ruins of the Roman Forum. The most poignant artifact I encountered was the Temple of the Vestal Virgins (above), where beautiful statues of the Vestal Virgins have miraculously survived the millenia. The Virgins guarded the “Sacred Fire of Vesta”, Rome’s eternal flame, and its most poignant and holy cultural symbol. Popular lore stated that should the flame be extinguished, so would Rome’s heart. Entry to the Temple was strictly forbidden, save for a select few.

As the Roman Empire slowly collapsed due to both internal and external forces, splitting into two (with the power center moving East to Constantinople) and sacked / burned several times by marauding intruders, still the flame burned.

Finally, in  394 AD, by order of the Christian Emperor Theodosius I, the rites of Vesta ended and the fire was extinguished. A collective sigh resonated through Rome’s chattering classes, chronicled by Roman historians. The weight of this symbolic act was apparent, even then.

This anecdote was chilling to me. I began to think about what our contemporary cultural symbols are: what is the metaphorical “fire” that burns at the heart of our civilization? What is the eternal flame that maintains human light, hope, development? What will it look like were it to be extinguished, and it what ways might this happen?

Has our eternal flame already been extinguished, and will future historians be able to point to an event that has already occurred, to events occurring all around us today?

As we continue to lament the fall of many of our institutions (in America, for example, bipartisan government; public education; a non-partisan judiciary, just to name three), we may be too distracted to notice when indeed, the fire is put out. Let’s hope we keep it burning.