An increasingly important focus in cities around the world is how to improve quality of life in terms of sustainable travel and associated health benefits. Cycling is a big part of these endeavours. Much has been written on the different ways to improve cycling and increase the uptake in cyclists. For example, there are a number of different ‘schools’ to follow (Danish, Dutch, or somewhere in between). But, there are many issues for getting different groups interested in cycling and for developing cycling in cities where cycling is either a low priority or little prevalence.

The first is an issue in big diverse cities with populations from all corners of the globe. For women, ethnic minority groups, and children cycling can be perceived to be dangerous and the city unwelcoming for the practice. Colleagues at the London School of Hygiene and Tropical Medicine have examined such issues with regards to encouraging a wider uptake in cycling for short trips or commuting within under-represented groups (Steinbeck et al, 2011). This is a complex problem that involves many different things from learning new skills, cultural norms, costs, and perceptions of what cycling involves.

The second is a problem that is associated with how to integrate new or sustainable infrastructure in cities that are envisioned as the preserve of the private motor vehicle. Ageing infrastructure is a growing problem in most cities. The case for infrastructure maintenance and renovation is a key theme in Amin and Thrift’s recently published “Seeing Like a City” (2017). But, there are many problems when it comes to actually trying to build new infrastructure like cycling paths where one doesn’t already exist. In Sofia, the capital of Bulgaria is a prime example of a city with low but growing cycling rates and cycling infrastructure that is best described as patchy (with good and bad elements – Barnfield and Plyushteva, 2016). Recently the municipal authorities have outlined ambitious plans to include a cycle path in the renovations of Dondukov Boulevard in central Sofia (the road surface requires repairing and the renovations will include a cycle path).

The photo below shows the current situation, with sparse current cycling facilities. The addition of a cycle path will be a big change: materially, spatially, and culturally. In the plans set out by the municipality in their cycling programme 2016-2019 (Програмата за развитие на велосипедния транспорт на територията на Столична община за периода 2016 – 2019) the exact finalised provision hasn’t been settled. Local advocacy groups are concerned by the lack of detail with work due to commence in June 2016. The decision whether to include two one-way cycle paths or a two-way single path is still unresolved (See the images below on the visualisation of one of the potential options). The challenges faced by Sofia and other cities in the region on how to integrate sustainable travel within existing and new infrastructure will be part of efforts to shape urban space and cultures for many years to come. 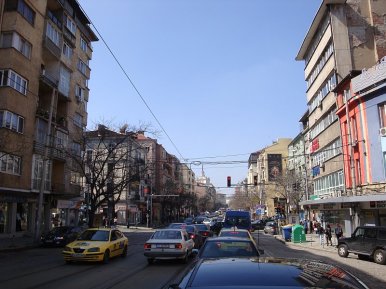