“15Mpedia, para que todo el mundo pueda contar <>” [15Mpedia, so that everyone can tell one’s 15M] is the description of a creative commons platform, within a larger idealized project called 15Mcc (15M Creative Commons), created to catalogue narratives, data, maps, articles, among other items related to the social movement originated in Spain in 2011 from the financial crisis that hit the whole continent. The platform attempts to convene sources about a social protest that reverberated over five years ago, as an ongoing example of “rhyzomatic revolution” happening in networked societies (Castells 2012, Merrifield 2014). We could argue that it generated a non-unified movement of multiple collective groups making impact in contemporary Spanish politics by precisely engaging virtual and physical use of space (Merrifield 2014).

Indignados and 15M, as political projects, can be interpreted as responses to the 2008 financial crisis in Spain. From the subdivision of these movements, two specific projects were created to focus solely on housing: the Platform for those Affected by Mortgages (PAH) and the Movement for the Right of Housing. Some of these visual material on independent productions of camping protests in the city of Barcelona and the appearance of manifests and protests anti-eviction (#nomásdesahucios) indicate how specific cultural projects appropriate the collective experience of housing/eviction and a loss of sense of commune in their virtual and physical platforms to question capitalist use of urban space. 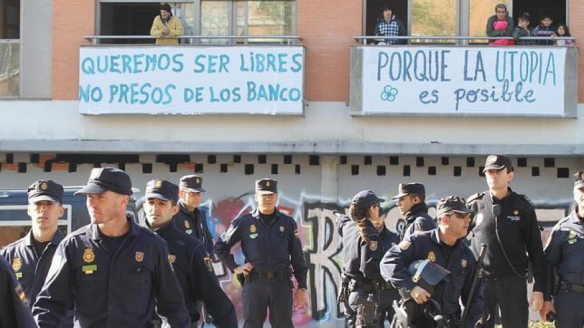 The photo above displays the following sentence: “Queremos ser libres, no presos de los bancos / porque la utopia es posible” [We want to be free, not jailed by the banks. Because utopia is possible]. The process of combined images of eviction and political protest counterbalance the lack of hope and disbelief in the process of seeing the human fabric that constitutes neighborhoods dismembered: in a move of the people against the system (Ressel 2011), of the acampadas against neoliberalism (Harvey 2012), and of the citizens of the city against the economic forces that govern it.

It is possible to notice that there was a combination of a series of economic factors that lead to high numbers of evictions. One of them, the cláusula suelo, a common financial practice followed by a later court decision on how the loan interest for housing were using abusive practices that protected instead bank institutions. Many lost their housing due to the implementation of those practices. Another complicating factor was the sale of public housing to banks, which subsequently lead to more removals: https://pahparla.blogspot.com.es/2017/01/comunnicado-encasa-cibeles.html?m=1.

One particular project that provides a collective experience of the neighborhoods being dismembered is “Poner rostro a las víctimas” [Put a face on the victims], photographing and distributing brief biographic information on the families being evicted .

Anti-eviction platform and protest were, then, fighting also the eviction of ill, disabled, elderly included, previous to the change of the law that protected that kind of eviction. A legal resolution from 1 de Julio de 2009 which determined protection in terms of electricity cuts for a series of individuals considered “colectivos vulnerables” [vulnerable groups], called “bono social” [social benefit]. Using the hashtag #Pobrezaenergéticamata [energy poverty kills], it tells stories such as the one of Rosa, an elderly lady in Reus, Tarragona (Nov. 2016). Because her gas supply was removed, she started using candles and ended up dead due to a fire.  What this indicates is also other forms of housing removal other than just displacement.

Occupation increased in urban areas during and after the crisis, and took different forms of activities and political ideas. For more information on the phenomenon of Okupas in Spain, please refer to Stephen Villaseca’s work (2013), offering a thorough reading on the ongoing movement before the 15M, and the protest of different groups against capitalist speculation, okuppying abandoned city spaces and creating new, communitarian uses for them.

Harvey, David. Rebel Cities: From the Right to the City to the Urban Revolution. New York: Verso, 2012.

1 thought on “Urban Protests, Housing Evictions, and Neighborhoods Dismembered: A Shared Collective Experience in the 15M”