‘Making a strong case for interdisciplinary layering as a way to represent the many layers – physical, social, aesthetic – of the city, Fraser’s visionary book is as much a meditation on the future of the digital humanities itself as it is on the city as an object of humanistic inquiry. He cogently charts a course for how humanists will employ thick mapping as a way to practice the digital humanities.’ [–David J. Staley, Associate Professor of History and Adjunct Associate Professor of Design, Director of the Goldberg Center at The Ohio State University, USA]

Digital Cities stakes claim to an interdisciplinary terrain where the humanities and social sciences combine with digital methods. Part I: Layers of the Interdisciplinary City converts a century of urban thinking into concise insights destined for digital application. Part II: Disciplinary/Digital Debates and the Urban Phenomenon delves into the bumpy history and uneven present landscape of interdisciplinary collaboration as they relate to digital urban projects. Part III: Toward a Theory of Digital Cities harnesses Henri Lefebvre’s capacious urban thinking and articulation of urban ‘levels’ to showcase where ‘deep maps’ and ‘thick mapping’ might take us. Benjamin Fraser argues that while disciplinary frictions still condition the potential of digital projects, the nature of the urban phenomenon pushes us toward an interdisciplinary and digital future where the primacy of cities is assured.

PART I: LAYERS OF THE INTERDISCIPLINARY CITY
1. What is the City?
2. Art and the Urban Experience

PART II: DISCIPLINARY/DIGITAL DEBATES AND THE URBAN PHENOMENON
3. The Humanities, the Social Sciences and the Digital Sciences
4. What is Urban Totality?

PART III: TOWARD A THEORY OF DIGITAL CITIES
5. What are Digital Cities?
6. Thick Mapping as Urban Metaphor

This text discusses the importance of collective memory within public space. The notion of ‘performative space’ is introduced, as one that evokes memory and emotion and provides ground for action or contains profound traces of past action. It is argued that radical art practices and performances in urban space contribute importantly to the preservation of the collective spirit and identity of space.

“We can understand how we recapture the past only by understanding how it is, in effect, preserved by our physical surroundings. It is to space – the space we occupy, traverse, have continual access to, or can at any time reconstruct in thought and imagination – that we must turn our attention. Our thought must focus on it if this or that category of remembrances is to reappear. […]the image…

Last week London was treated to a visit from Pittsburgh born, Miami based, Street Artist Kyle Holbrook, who laid some three works, with two around the East End and one in Camden Town. All three works are laid out in Kyle Holbrook’s distinctive purple, white and yellow colour scheme and painted entirely by brush.

The first work from Kyle Holbrook, laid out at a Paint Jam put on by Hidden Streets Of London in Paradise Row 2 weekends back. The scene painted by Kyle Holbrook is superb in choice, choosing to paint the Paint Jam around him.

Kyle Holbrook’s second London work, this time laid on in Camden Town with support from The Real Art of Street Art. On this occasion going with a piece inspired by the manufactured influences in people’s lives today.

Kyle Holbrook’s final addition to London’s streets, this time as part of a collaboration with Himbad… 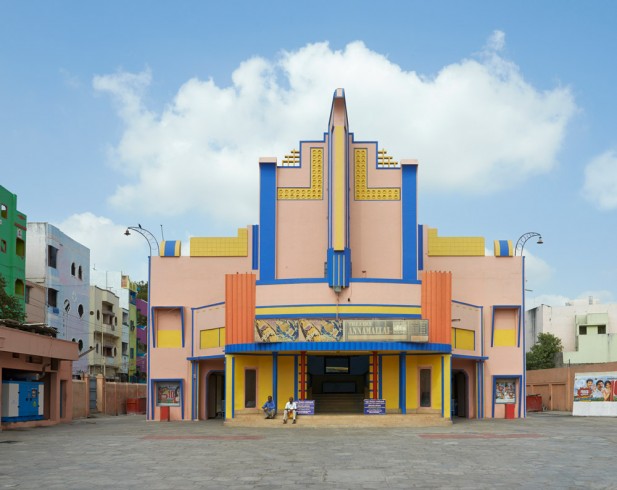 Saubine Haubitz and Stefanie Zoche are intrepid photographers of thought-provoking things.  Here, they discuss their series on movie theaters in India…

In three journeys between 2010 and 2013 we have photographed movie theatres from the ‘Thirties to the ‘Seventies in South India. The photos of these buildings give eloquent testimony to the rich cinematic culture of those times. We are particularly interested in the culturally influenced reinterpretation of modern building style apparent in the architectural style, which displays an unusual mixture of Modernism, local architectural elements, a strong use of colour and, in the case of some older cinema halls, of Art Deco…

Many movie theatres in South India are left in their original state. Nonetheless, remodelling into multiplex cinemas is already underway, in particular in major cities, and will result in these buildings’ disappearance as witnesses to their times. The photographs document a part of cinema culture that has…

His day job is architect. His OTHER job is urban artist. He is based out of Buenos Aires (Buenos Aires born ). He sometimes goes by Pastelfd (the fd is for  Francisco Diaz–his day name.).

On to his images:

All countries that constitute Latin America are developing countries; approximately 124 million of Latin American urban inhabitants live in poverty. The south-continent has always been characterized by the concentration of population in a few cities. However, nowadays the megacities of the subcontinent (Sao Paulo, Mexico City, Buenos Aires, among others) concentrate only 14 per cent of the urban population; while more than a half of urban inhabitants live in “secondary metropolis”. In Latin America there are approximately 55 cities with a population that ranges from 1 to 5 million of inhabitants. Hence, one may ask: Is this urban structure “modern”?

According to Marshall Berman, the modern life is a combination of different processes like scientific and technological advances; the industrialized production; urban growth; mass communication systems; the state and its bureaucracy; social movements; and the capitalist market. These processes are called “modernization”; the group of values and ideas that…

“Heterotopia and Benjamin’s Arcade Project” – a discussion by Peter Johnson at Heterotopian Studies.

I have been asked whether I think there is any productive link between heterotopia and Walter Benjamin’s Arcades Project. I went back to Benjamin’s inspirational book and offer the following initial thoughts. For those unfamiliar with Benjamin’s work, I provide a very brief outline before addressing some similarities and differences between the two. Page references are to the 1999 translation (see below).

The Greeks may have been the first people to give us a clear image of the citizen in any politically intelligible sense of the term. Tribal people form social groups – families, clans, personal and community alliances, sororal and fraternal clubs, vocational and totemic societies, and the like. They may assemble regularly to examine and decide communal affairs – certainly a nascent form of politics – but the issues that confront them rarely deal with ways and means of governing themselves. Custom plays a paramount role in establishing their norms for community management; discourse beyond direct argumentation, occupies a place secondary to the enormous authority of precedence and long-established administrative procedures. Nor is this approach to be disdained as trivial or ”primitive”. Group safety and stability require that the community preserve the old, well-tested…

Françoise-Hélène Jourda was a militant architect. She was one of the first to call for the integration of ecology  in architecture, also one claiming that architects have a social responsibility to stand for.

At a time when architecture is a lackey-service to real-estate companies and in the verge of becoming a secondary discipline in the face of world urbanization, Jourda’s call seemed all the most necessary. Jourda pleaded  for a more economical building process, reducing the use of resources and of energy.

” Françoise-Hélène Jourda’s leitmotiv for more than twenty years has been an environmental approach in the broadest sense of the term, and she has been constructing buildings without respecting conventions and stylistic preconceptions. “I am now a very happy woman”, she said as the Chairwoman of architecture and sustainable development at Vienna Technical University, “The subjects that I have been fighting for have finally become respectable”.  Françoise-Hélène Jourda…